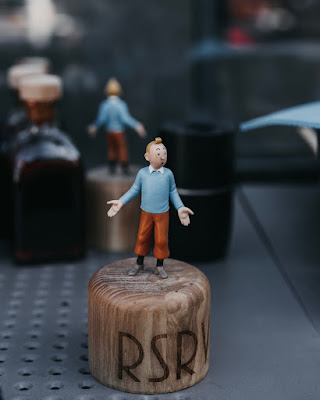 Through my today’s post whether you are going to gain a lot of surprises or not, I can assure you that you will be very lucky to have fun with this post of mine.
So welcome back to my blog with the list of top 10 animated films. Like my first post, here I have come up with the suggestion of 10 animated films which should be in your watchlist. I think, you will love to watch them and enjoy sitting with your kids.
Of course, there are the classic Disney and Pixar films, which come with some of the most endearing songs and characters in all of animated movies which are not only for kids but also for adult movie buffs.
Coraline
This is not a movie of neither Disney nor Pixar. But this one satisfied me much as a film lover especially an animated film lover.
After being released in Portland International Film Festival this movie was well received by both critics and audiences. Coraline won Annie Awards for Best Music in an Animated feature production, Best Character Design in an Animated Feature Production and Best Production Design in an Animated Feature Production, and received nominations for an academy award for best animated feature film and a golden globe award for best animated feature film.
Watch it on Netflix, Amazon Prime
The Adventures of Tintin 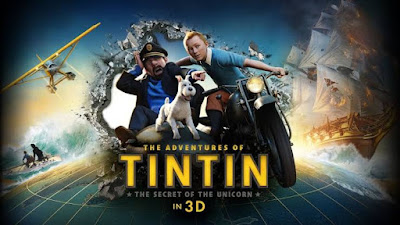 Who doesn’t know Tintin? Who doesn’t want to adore his cute fox terrier snowy? Who didn’t count the slangs of Captain Haddock? Childhood idol of a lot of us is also present in this list.
Legendary director Steven Spielberg who gifted us with film’s like Jaws, Jurassic Park, E.T- the extra-terrestrial, Indiana Jones etc., has crafted another thrilling, spirited, engaging adventures of Tintin, the intrepid young reporter whose relentless pursuit of a good story thrusts him into a world of high adventure.
Jamie Bell portrayed the role of Hergé’s Tintin. Also stars Andy Serkis, Daniel Craig, Simon Pegg, Nick Frost, Toby Jones. Peter Jackson co-produced this film.
Spielberg and Hergé were admirers of each other’s work; the director acquired the rights of Tintin’s comics following the year 1983 when the great cartoonist breathed his last.
This film is the first motion captured animated film as well as a non Pixar’s to win the Golden Globe Award for Best Animated Feature Film.
So if you love tintin or not this film will impress you as a good watch in this quarantine.
Watch it on Netflix, Amazon Prime
Kubo and the Two Strings 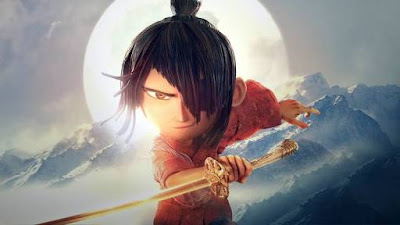 Kubo and the Two Strings is one of the most beautiful example of stop-motion animated films in recent time. This 2016 animated film is inspired from Japanese ink wash painting and origami. This film has an influence which came from ukiyo-e woodblock style.
I found what a very interesting type of animated film this is. The story is also very loveable.  This movie is about Kubo, a young one-eyed storyteller who lives in hiding from his evil aunts and moon king. In order to defeat them he must find his father’s suit of armour , along with Monkey (Charlize Theron) and Beetle (Matthew McConaughey).
Gorgeously animated and stirringly told this movie is an epic combination of stop-motion animation and computer-generated backgrounds with a moving and magical tale. This film is about  the love of mothers and sons.
So if you like inspirational and motivational story with some fights, and a unique style of storytelling so this one is for you.
Watch it on Netflix, Amazon Prime
Big Hero 6 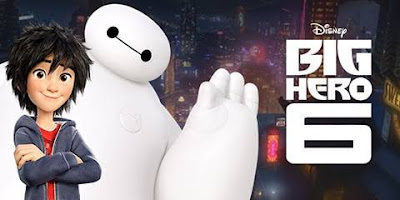 Big Hero 6 is a 2014 3D animated superhero film of Disney’s and it’s one of my favourite animated movies. This movie is loosely based on a Marvel comics of the same name.
Hiro Hamada, a young robotics prodigy teams up with Baymax and then his friends to avenge his brother’s death.
Agreeably entertaining and brilliantly animated, Big Hero 6 is briskly-paced, action packed and often touching so you will be stunned by it.
So if you like superhero genre so this movie is for you. This movie is not just only for kids.
Watch it on Amazon Prime
Spiderman Into The Spider-Verse 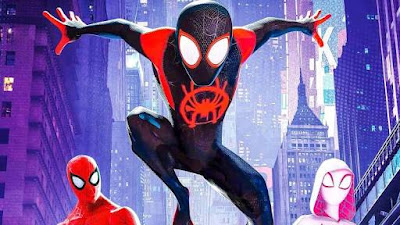 There has been a lot of Spiderman movies in the last 20 years. Every movie is focused on our beloved Peter Parker. This movie also have Peter Parker but this movie is centred on Miles Morales. This is also the first animated feature on Spiderman. Miles is a school goer teen who becomes the Spider-Man in his reality, and joins with his counter parts from other dimensions to stop a threat.
This movie’s presentation is like you are reading
a beautifully crafted comicbook.  The elements like the characters’ thoughts or Spider-senses enter the picture, they help add to the comic book illusion. Only for these specialities, this film makes anyone become the Spider-Man. It is such a joy and one of the best animated films ever made. This film bagged several awards including the Academy Award.
Watch it on Netflix
Ratatouille 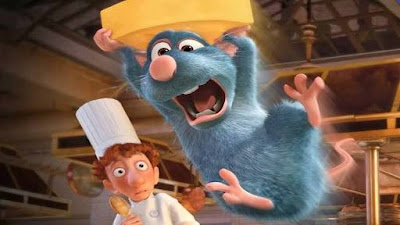 Ratatouille is a 2007 American 3D animated comedy produced by Pixar and released by Disney was praised by both critics and audiences to be a cult film.
Ratatouille uncovers the struggle of a rat named Remy and a talentless son of a famous chef. Remy loves to cook and get entangled with Lou Romano who wants to be a chef.
Gorgeously animated, gripping and inspiring story with emotional soundtrack Ratatouille is a great watch for everyone. Kids are gonna gobble Ratatouille up; adults will relish its wit, and everyone will want to go out to eat after watching this film. Some food making scenes in this film will make your mouth water. This film won the Academy Award for best Animated Feature.
Watch it on Amazon Prime
WALL-E 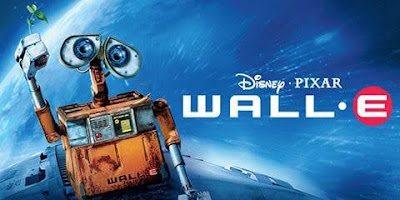 WALL-E is a American 3D-animated sci-fi romantic film produced by Pixar Animation Studios for Walt Disney Productions. The romance between a couple of robots WALL-E and EVE showed in the movie with a background of dystopian future. The timely story offers thought-provoking content in this film. WALL-E tells the story of a scary future which can very well be a reality. But there is also hope in it.
WALL-E was released in the United States on June 27, 2008. The film was critically praised for its animation, story, voice acting, characters, score, and use of minimal dialogue. It was also commercially successful, grossing $533.3 million worldwide over a $180 million budget. This film also won Academy Award for best animated feature and Golden globe also.
Watch it on Amazon Prime
Up

3D Animated comedy-buddy film Up will take you on an adventure with Carl Fredrickson, an elderly widower and an earnest and cute boy Russel. Tying thousands of balloons to his house
Carl sets out to complete a promise made to his late wife and fulfil his dream to see the wilds of South America.
One of the reasons why this movie will be loved by everyone is how a little kid Russel influenced an oldman Carl. That is a very good point in where you will be stunned to see how well the storytelling is. I really loved and enjoyed this film a lot. Whenever I recall some scenes I begin to laugh on my own or with my elder brother at home.
Opening the 2009 Cannes Film festival, it became the first 3D animated film to do so. Up was a commercial success and received universal acclaim, with critics calling it one of the best animated films of all time. This beautiful and adorable movie won the Academy Award for best Animated Feature.
Watch it on Amazon Prime
Coco 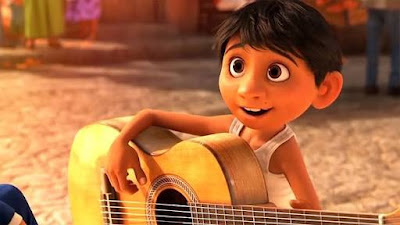 This is one of my all time favourites. Coco is a mind refreshing musical movie. It’s also very inspiring. Fresh musics and very good animation made this film awesome.
Coco is centred around a teenager named Miguel.  He dreams to be an accomplished musician, but his family was in dead against of music. Then he stumbles into the land of the dead, where he learns about his great-great-grandfather who was a legendary singer.
Coco became successful both critically and commercially. It bagged Academy Award for best animated feature
Watch it on Netflix, Amazon Prime
Inside Out 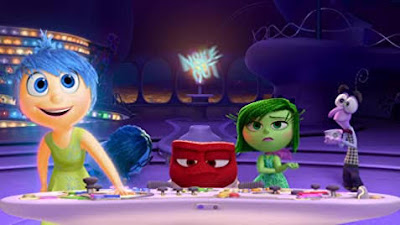 Now it’s time to share my all time favourite animated film which has an incredible depths and emotions Inside Out. This is another addition in Pixar’s library of masterpieces.
This film shows the works of the emotions inside
our brain. This will surely make room in everyone’s heart. If you watch you can connect your mind with this film. Inside Out has a unique way to teach how to deal with our emotions. This is definitely a timeless gem.
This film was a blockbuster and won several awards including Academy Award for best animated feature.
Watch it on Amazon Prime
So, which one are you going to watch first? If you have enjoyed reading, please comment and share. If you have any suggestions feel free to share here. I am all ear to hear from you 😊.
Follow me on
Instagram
Facebook
Twitter
*Image source
« Previous PostNext Post »