August 1, 2020
After the much loved Extraction, Netflix’s new Superhero entry is The Old Guard. I watched it and my today’s post is about this action thriller. 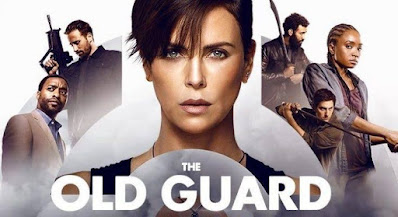 With a cancelled summer season of movie industries we don’t expect movies to be released in our nearby theatres anytime soon. Superhero films like Black Widow and Wonder Woman 1984 got delayed for this pandemic situation. Many audiences are upset with these news. So now OTTs are the only medium of entertainment until it’s safe to open theatres. To our rescue, online streaming services are now providing us with such entertainment.
It was surprising to know that Netflix’s
The Old Guard is a superhero film. Then I searched about this movie and came to know that it is based on a Comic book series. Honestly, I am a die-hard fan of comic book based movies. And my excitement knows no bounds when I sit to watch.
In this film Andy (Charlize Theron) is an immortal mercenary. She leads an elite team of century-old mercenaries. There are three other mercenaries in her team, Booker (Mathias Schoenaerts), Joe (Marwen Kenzari) and Nicky (Luca Marinelli). Those hidden and secret mercenaries suddenly face a threat from Copley (Chiwetel Ejiofor), a former CIA agent. At the same time they find out another immortal Nile (Kike Layne), a marine who then joins their team. Then they must fight for their freedom and find out who Copley is and what he wants from them ? 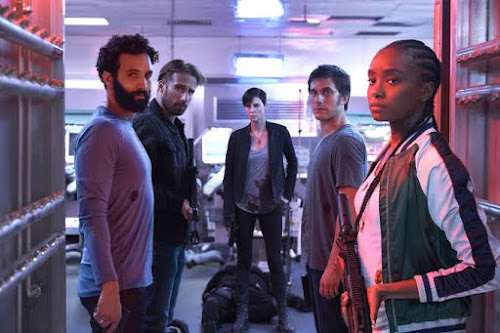 I have watched Charlize Theron in Mad Max Fury Road and The Fate Of The Furious before this. She was such a badass on those movies. She doesn’t disappoint me in this one too. Other cast members also did a decent job. The action scenes are well choreographed.
The Old Guard is not a masterpiece but I really enjoyed this movie. It has several solid action sequences, tense moments, great locations, good acting everything. Here Andy (Charlize Theron) is like a female Ethan Hunt who can heal her injuries like Wolverine. While fighting she is like a female John Wick. Still she has the potential to be in your fav-list. Also, the characters have some backstories which are enough to make you curious about them. Sometimes you will love these characters for their cool superpowers of healing themselves. The fast-paced storytelling and action-packed sequences will engage you to sit tightly. This is the kind of movie which can be liked by anyone who finds movies nothing but an entertainment. In the action scenes there are no high stakes in this movie. A sequel is also on its way. In the end credits there is a hint of this.
Why watch –
Firstly, if you are not in a good mood or bored you must watch this. You are surely going to have a lot of fun watching this.
Secondly, if you love Extraction and are looking for a similar kind of movie you should watch this.
Thirdly, in every moment you will think that they will heal or not. This tension will engage you to the end of this movie.
Finally, Charlize Theron’s badass action moves will definitely give you an adrenaline rush.
Why don’t watch-
Firstly, if you expect a movie like top MCU movies (like Captain America The Winter Soldier, Iron Man, Avengers etc) then this will not be in your favourites.
Secondly, if you don’t like superheroes I feel you won’t enjoy this.
Thirdly, I don’t like the distracting soundtrack used in some action sequences in this film.
Fourthly, there are some cliché and predictable sequences in this film.
Finally, this movie does not have a strong storyline.
This is nothing but a popcorn movie which is a bit cliché.
Overall The Old Guard is a perfect popcorn film. Every superhero fantasy has rules of there type of storytelling, screenplay, and world-building.  A successful superhero movie must follow those rules. The Old Guard follows them very well. You will never feel bored watching this flick. It has proven how an average content can be a very solid and enjoyable ride due to its good direction and screenplay. So if you haven’t watched it yet, go for it in this weekend.
Available on Netflix
*Image source
« Previous PostNext Post »